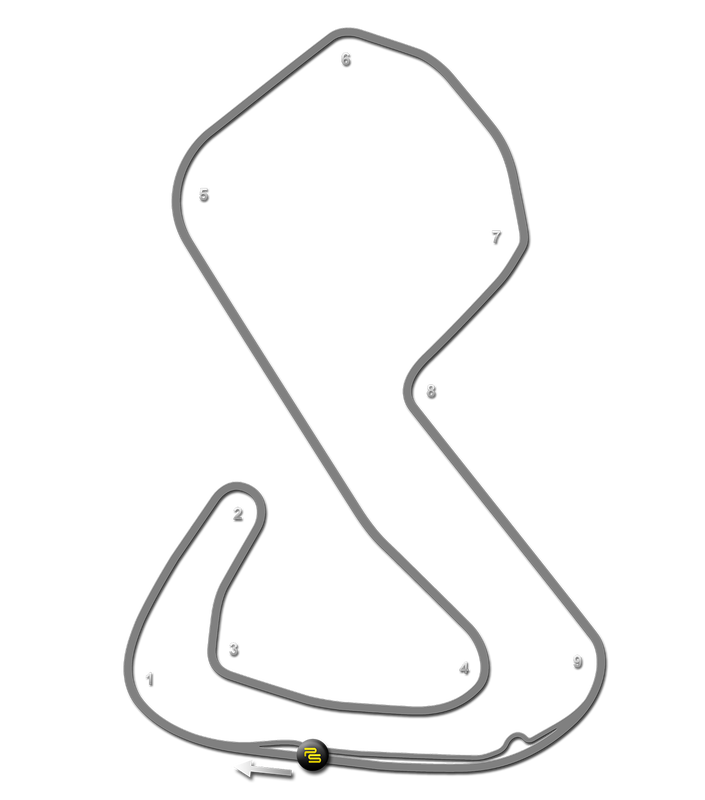 Circuit History
"Why the authorities spend millions of pounds trying to turn Silverstone into a great circuit when we have one already in Brands Hatch is a mystery to me."

So says Murray Walker and who would argue? Rated as one of the finest driver's circuits to have graced the motor racing calendar, Brands Hatch is thankfully little changed from its classic format.

The origins of the circuit lie with a group of cyclists, led by Ron Argent, who paused to stop by a mushroom field on the London-Dover road after a 125-mile tour in 1926.  Used for many years for military training, the field belonged to the nearby Brands Hatch Farm.  Noticing the bowl-shaped contours of the land, the cyclists asked the farmer if they could use it to practice on.  He agreed, and for several years the field became a Mecca for cyclists in the London area, who used the dirt roads carved out by the farm machinery.

For two years, little else happened at Brands Hatch (the name is thought to derive from 'de Brondehach', a Gaelic term: 'Bron' meaning wooded slope; 'hach', literally entrance to the forest).  Argent and his friends used it at weekends and a small cafe was set up in a converted army hut for the cyclists and their families to take a well-earned rest in.
The first race proper was an unusual four mile match race between cyclists and cross-country runners in 1928.  Rather surprisingly, the runners won, although they did have the advantage of having Australian world champion Jackie Hoobin among their number...

Motorcyclists ventured onto the track occasionally, patiently waiting for the cyclists to finish but it wasn't until the end of hostilities in World War 2 that Brands Hatch became serious about its motorsport.  Used during the war as a military vehicle park, the circuit was subject to numerous bombing raids and needed much work to get it back up to scratch.
The finest grass circuit in the country, complete with terraced earth spectator banks, soon sprang up under the supervision of Brands Hatch Stadium Ltd, which formed in 1947 to run the circuit.  The rise of 500cc F3 cars made surfacing the circuit imperative and this was duly done in 1950, with a course resembling the current Indy circuit, minus the Druids loop.  In the process, it became Britain's first post-war, purpose-built circuit.

Gradually, Brands Hatch began to emerge as a real racetrack.  Telephones were installed in the marshals' posts and the central control and a small, well-equipped field hospital was added.  Unusually for the times, the circuit also boasted a high capacity, continental grandstand along the top straight, purchased in the early months when Northolt racecourse closed.
Both motorcycle and car races were now being held, but there was little scope for expansion without further investment and an extension of the circuit.  This began in 1954 with the addition of the Druids loop and the switching of racing to a clockwise direction.  Pits and further spectator banks were also added at this time.

The sale of the land to property development firm Grovewood Securities in April 1961 really speeded things up.  Fears that this would mean the closure of the circuit in favor of housing proved unfounded when Grovewood created a holding company, Motor Circuit Developments, to oversee the track and installed John Webb – previously the circuit press officer – as general manager.  A great era at Brands had begun.

The circuit began to turn a profit and in 1960, long-held ambitions to create a Grand Prix loop were realized.  To get around planning restrictions, the course extension followed tracks that had previously been used by scrambler bikes and, with permission duly granted by Kent County Council, construction began in January and was completed in time for the August Bank Holiday meeting.

The new 2.65-mile track used all of the existing course with the exception of Kidney Bend; South Bank became a long sweeping left-hander out into the wooded countryside beyond.  From there, a long straight dipped into and out of a valley before arriving at the high speed Hawthorn Bend.  The Portobello Straight followed, leading into another fast right-hander, Westfield, before the dip at Dingle Dell and Dingle Dell Corner.  A difficult left-hander - Stirling's - followed, before the course headed back along Clearways and onto the final corner at much greater speed than before.

The burning ambition of Webb and MCD was realized in 1964 when the circuit hosted Formula One for the first time, under the courtesy title of the European Grand Prix.  Thereafter the race alternated with Silverstone and witnessed a number of thrilling battles, with victories from Clark, Brabham, Siffert, Rindt and Fittipaldi.

Safety had always been an issue at Brands and during the winter of 1965-66, Paddock Hill Bend acquired a fearsome reputation, claiming the lives of George Crossman, Tony Flory and Stuart Duncan.  The death of Jo Siffert in 1971 led to major safety works and new pit buildings and grandstands appeared the following year.

Further changes came in 1976, when Paddock Hill Bend was realigned, with a new stretch of tarmac laid, moving the apex further inside and tightening the corner slightly.  The old tarmac was left in-situ as run-off.  Bottom Straight was also realigned, making it straighter (if not completely straight) and further Armco barriers were installed around the course.  The total cost of the modifications was £100,000.
Business continued as usual until 1986, when the F1 GP was staged for the final time.  A multiple start line collision seriously injured Jacques Laffite (fellow driver and eventual Brands owner Jonathan Palmer, a qualified doctor, was among those coming to his aid) and the open expanses of Silverstone seemed more appropriate to the authorities.

Brands continued on after the loss of the Grand Prix, its highest-profile single-seater series thus becoming a round of the F3000 championship.  Ahead of the 1988 season, changes were made to Westfield Corner, which was given more room for run off by being effectively squared off; two corners joined by a short straight replaced the sweeping right-hander, though speeds were not notably reduced.

Further around the lap, concerns about the lack of run-off at Dingle Dell Corner were addressed by the insertion of a chicane.  It became one of the most spectacular features; blind on entry, cars would fly across the kerbs at barely abated speed.  It was questionable whether this solved the problem; Michel Trollé's fearsome crash in practice for the 1988 F3000 event casts considerable doubt on this.
Worse was to come in the race, when a multi-car pile-up following a red flag restart saw the cars of Herbert and Foitek collide, and a chain reaction behind eliminating half of the field.  Herbert suffered horrendous injuries to his feet and ankles and ended up sharing a hospital ward with Trollé.  Both eventually recovered, though in each case had lost a considerable amount of career momentum.
Brands continued on with F3000 until 1992, then focused on becoming the spiritual home of World Superbike racing.  Each year attendances were among the highest of any circuit, boosted by the exploits of homegrown stars such as Carl Fogarty, Neil Hodgson and James Toseland.

New pits were also added in the late-1990s along with an impressive corporate hospitality center.  Graham Hill Bend was also reprofiled and slowed, though it did enhance the chances of overtaking.  Latterly, upgrades have taken place following the short-lived arrival of Champ Cars, with new spectator fencing added on the Indy circuit.  Elsewhere, the chicane at Dingle Dell was removed and a new corner added, named after Barry Sheene.

Having been sold to the Interpublic Group, the Brands Hatch group of circuits (comprising the Kent venue, Cadwell Park, Snetterton and Oulton Park) found themselves under new ownership once more at the end of 2004, when the MotorSport Vision group formed by Jonathan Palmer took over.

A programme of general updates under MotorSport Vision's ownership have meant that Brands has never looked better and were richly rewarded with international-standard events on the WTCC and DTM calendars in 2006.  Recent years have seen the WTCC and DTM elect to move their events overseas, while a dispute over hosting fees saw the World Superbikes switch to Donington Park for 2009.  Today's headline international event is the Blancpain GT Series, while the British Touring Car and British Superbike Championships remain major crowd pullers.
THE PHYSICS OF  Road • Oval •  Kart • Autocross • Sim •  Off-road   RACING