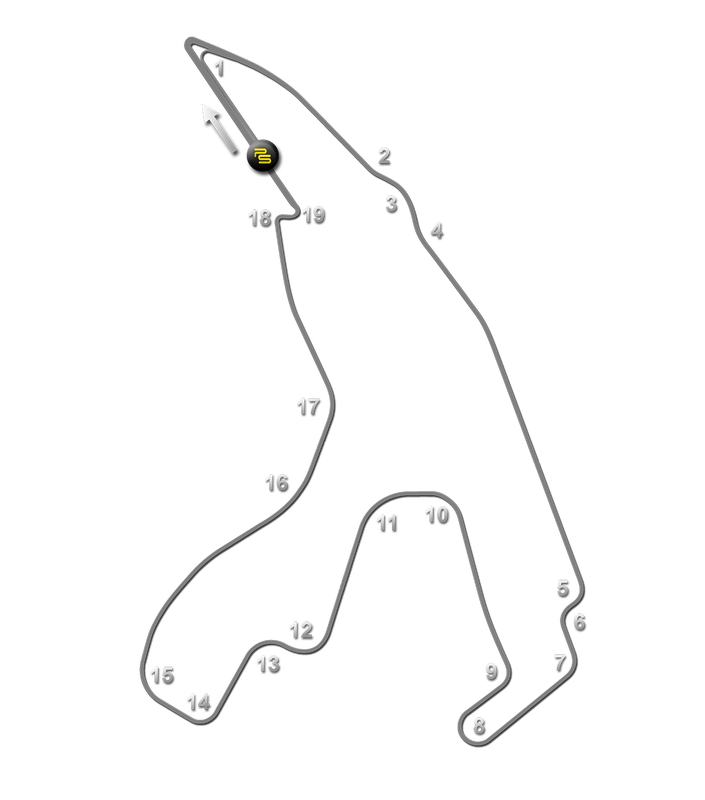 Circuit History
Spa-Francorchamps is one of the classic race circuits beloved by drivers and spectators alike, where today the true essence of speed can be explored in spectacular style on a safe and modern facility. However, it hasn't always been like this; in its original incarnation, Spa was a circuit truly to be feared as it posed dangers almost like no other. Fast straights, sweeping corners and unpredictable weather could combine to create a lethal combination – and too often did.

Motor racing had become increasingly popular in Belgium after the First World War and the Ardennes region hosted a number of races before the spotlight fell on the roads around the town of Spa-Francorchamps – until then more famous for its healing waters. The combination of long straights and rolling countryside seemed perfect for the new sport, offering the chance to attain high speeds. Attempts were made to organize the first race in 1921, but these foundered when there was only one entered car.

Eventually, the track was inaugurated by the motorcyclists, with the cars following in 1922. Two years later came the first running of the famous 24 Hours of Francorchamps, only one year after Le Mans, while the first real big international race for single-seaters, the European Grand Prix, was run in 1925. Seven cars took part in this event with victory falling to Antonio Ascari and Alfa Romeo.

The first course saw the cars head down the hill from La Source to a left-hand band leading to a hairpin (named after a former customs post which had occupied the site until 1920), before the track rose to Raidillon and headed out on fast, flowing roads to Malmedy, onto Stavelot before sweeping back to Francorchamps in a roughly triangular course.
Over the years there were relatively few modifications to the circuit; a chicane at Malmedy was bypassed in 1930, then reused again four years later before being discarded once more in 1939. It was also in this year that the circuit's signature corner sequences was born when a connecting road, bypassing the Virage de Ancienne Douane, was constructed. The sweeping uphill left-right-left combination (known popularly, but incorrectly, as Eau Rouge; this is actually the first corner at the bottom of the hill, rather than the one at the top, which is Raidillon), became an instant classic.

World War Two intervened before too long, however, and like many other circuits in Europe, Spa-Francorchamps suffered at the hands of heavy artillery, so racing did not resume until repairs were complete in 1947. Several modifications were made at this point; the Malmedy chicane was once again bypassed and, in order to keep the circuit of the town itself, a new sweeping and banked corner was built at Stavelot.

Even then, safety was marginal, as racers did battle on a circuit which was little different from the normal roads used by the public, save for a few strategically placed hay bales. With ever-increasing speeds and no margin for error, death was an inevitable constant. The roll call of fatalities grew frighteningly long: in 1958 Archie Scott-Brown crashed and died at the same corner that pre-war Mercedes-Benz driver Dick Seaman had perished; Chris Bristow and Alan Stacey were killed in the 1960 Grand Prix; Eric de Keyn and Wil Loos in the 1967 Spa 24 Hours; Tony Hegbourne and Leon Dernier followed in short order.

Even the major stars of the day had serious collisions here: in the fateful 1960 race, Stirling Moss was severely injured in a crash at Burnenville during practice and it was after a 1965 crash, when his BRM ended upside-down in the cellar of the farmhouse on the outside of Masta corner, that Jackie Stewart began his calls for safety improvements, not only to circuits, but to cars, medical facilities and marshalling standards.

By 1969, Stewart's fellow Grand Prix drivers were largely in agreement and successfully boycotted the Grand Prix when demanded safety improvements had not been carried out. They relented in 1970 when armco barriers were erected around the circuit, but only after the last minute installation of a temporary chicane at Malmedy. It was to prove the last F1 event on the old course.

Despite the dangers, the famous 24 hour race continued, as did visits from sportscar series and motorcycle races. The grim statistics also remained: two deaths in 1971, one in 1972, three during the 1973 24 Hours and another two in 1975. Some efforts were made to improve safety, although a new chicane installed at the Masta Kink in 1975 was judged to be even more dangerous than the original corner and was never raced.

It was clear that it was only a matter of time before authorities brought an end to proceedings permanently. Racing could only survive if a safer, shorter and more modern course could be created.

The solution came in 1979, when a new section of permanent track was built to create a much shorter 4 mile circuit. This saw the cars turn off the old course before Les Combes, heading down the valley through a fast but technical section before returning to the old course before Blanchimont. The new circuit was a universal hit, retaining its character as one of the most challenging in the world but with safety margins, which had hitherto been unimaginable.

Nevertheless, there was still room for further refinements. In 1981, to slow cars through the old Clubhouse corner, a chicane was installed. A slightly clumsy left-right, right-left double corner, it instantly acquired the nickname of the 'bus stop chicane'. 1983 saw the return of Formula One, utilizing brand new F1-only pit facilities on the straight between the bus stop and La Source. There was controversy when the original meeting had to be postponed to later in the year after the track surface broke up.

Changes were forced on the circuit following the 1993 crash of Alex Zanardi at Raidillon during GP practice; the following year saw a slow chicane inserted at Eau Rouge but by the following year the classic layout was back with much improved run-off areas. Revised pit entry and exit lanes debuted in 2000 (with a particularly tortuous route for those using the sportscar pits), before further revisions to the run-off at Eau Rouge and Raidillon necessitated slight track realignments, though without fundamentally altering the natures of the corners.
Further changes came in 2004, when the entry to the Bus Stop chicane was altered; the road diverted in a curving arc to the right, before entering a tight left-hander and continuing as before. The change improved run-off but did have the consequence of requiring heavy braking through the curved right hander and was not universally popular.

Spa's future was in doubt by the end of 2005, when further track improvements demanded by Bernie Ecclestone failed to materialize, following the bankruptcy of the race promoter. The race was dropped from the F1 schedule for 2006. The Government of Wallonia stepped in with the necessary funding, allowing the radical rebuilding of the F1 pit facilities for the 2007 season. Much more spacious than before, the facilities freed up new land to remodel, once again, the bus stop chicane. Now a switchback double hairpin with acres of run-off room, it undoubtedly provides an overtaking point, but is a total disruption to the flow of the rest of the circuit. There may be no compromises in safety these days, but the resulting circuit changes certainly do have compromises...

Other changes included the lengthening of the main straight to La Source and the sealing off of the former public roads to create a permanent, closed racing facility for the first time. Formula One duly returned and the race has once again become an annual highlight of the racing season.
​
Outside of F1, the circuit has a full calendar of events, including the 24 Hours (now run to the popular GT3 rules), the 1000km World Endurance Event for sportscars, rounds of the WTCC and World Series by Renault and a popular historic meeting, the Spa Six Hours. There's even a 24 hour race for Citroën 2CVs to round off the racing season!