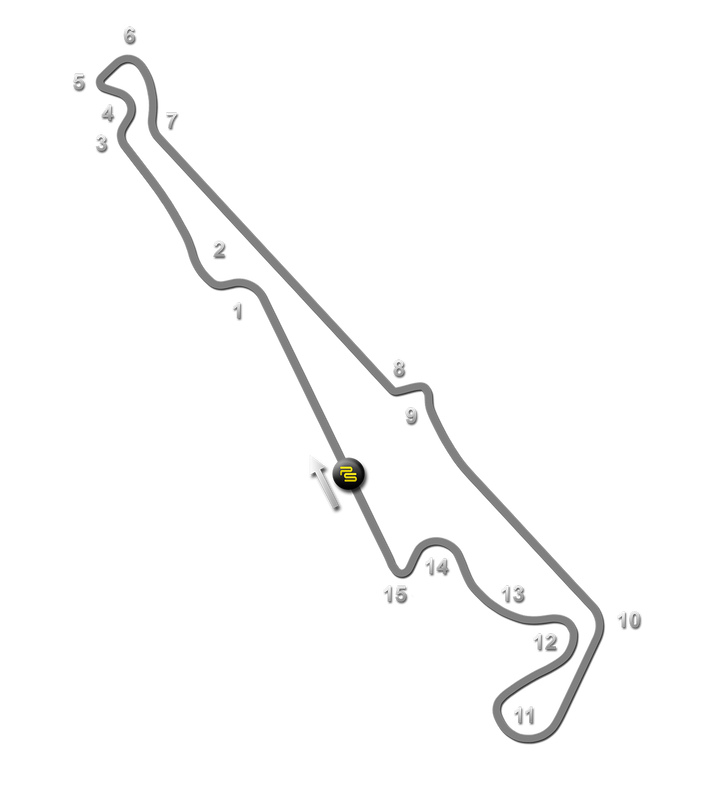 Circuit History
​The Paul Ricard circuit has, in two very different eras, claimed the title of the most modern motorsport facility in the world. Constructed by drinks magnate Paul Ricard at Le Castellet in the south of France, the circuit was the first of the modern autodromes - a little sterile for those brought up on classic road racing circuits but with excellent facilities for the fans and teams.

Exactly why Paul Ricard decided to build his eponymous racing circuit is slightly lost in the mists of time; with a ban on advertising his pastis drinks in France, Ricard was an early adopter of sports sponsorship as a means of promoting his product and so the circuit could well have been a simple extension of the same philosophy. Others point to Ricard's disdain for the power of the French state and bureaucracy and suggest the circuit was an effort to prove that private companies could successfully build road networks (construction of the nation's slowly emerging network of autoroutes at that time remaining firmly in the state's control). Whatever the reason, it was undeniably a facility constructed to the highest standards

Plans for the circuit were advanced in a relatively short time frame, though Ricard rejected the initial proposals, which were designed by architects unfamiliar with motorsport. French racing luminaries Henri Pescarolo and Jean-Pierre Beltoise were brought in to give their expert advice and soon construction began to a revised blueprint. In just 10 months the circuit sprang up on a plot of land near the town of Signes, where Ricard had earlier built an airport to serve his business interests (in typical Ricard style, this was the largest private airfield in the region).

Opening in April 1970 with a 2-litre sportscar race won by Brian Redman, Circuit Paul Ricard quickly usurped the fading Clermont-Ferrand and Rouen tracks as the premier venue for French motorsport. Within short order, it had secured the French Grand Prix, hosting it from 1971 for 14 years. While the Grand Prix drivers may not have been overly impressed with driving challenge, they were no doubt appreciative of the expansive run-off areas, which were considerably larger than any other circuit at the time.

The new track did boast one weapon of note in its armory, however; at the end of the mile-long Mistral straight lay the Signes corner, a high speed change of direction which was not for the faint-hearted.

Four layout variations were offered; the full 3.61-miles Grand Prix circuit utilized the full Mistral straight, while two shorter versions cut out significant portions of the northern end of the course and offered laps of 2.3-miles and 1.8 miles respectively. A 1.4 miles school course completed the variations.

In its heyday Le Castellet was considered the safest circuit in the world and became the setting for many national and international motor sports competitions, including 14 Formula 1 events, numerous Bol d´Or motorbike endurance races and 12 World Motorbike Championship Grands Prix. The warm climate and easy access via the airfield meant that Paul Ricard also quickly became the de facto winter testing venue for European teams.

Its reputation for safety was diminished in 1986 when Elio de Angelis was killed at the quick Verrerie corner complex while testing for Brabham. The absence of adequate marshalling and medical staffing during test sessions (a routine occurrence in those days) was as much to blame as the circuit configuration, but nevertheless the Grand Prix ran on the medium-length course from then on.
The days as a top international circuit were numbered when the F1 Grand Prix switched to Magny-Cours, while the Motorbike GP headed to Le Mans. The last world-class events were the Touring Car World Cup in 1995 and several rounds of the BPR Endurance Series. Very little investment had been made in the intervening years and the venue and its facilities could certainly not be considered world-leading any more.

That all changed in 1999 when the whole site (including the airport) was purchased by the Excelis Company, owned by Formula One boss Bernie Ecclestone. Plans were announced to close the circuit at the end of the season and extensively redevelop the venue as a high speed test track. Philippe Gurdjian, organizer of the French Grand Prix from 1985 to 1997, was appointed to take care of the renovation works, which were completed by 2001.

Changes to the layout itself were relatively modest; the Bendor chicane was removed, while the remaining corners of the lap were also mildly re-profiled and re-named. At the other end of the circuit, the Chicane and École corners were also re-routed to create more run-off, creating slightly tighter turns as a result. New optional corners were added to create multiple circuit variations, including a chicane complex halfway along the Mistral and a squared-off alternative at Signes.

Visually, the biggest change was in the adoption of a pioneering new high-grip asphalt run-off system to replace the gravel traps of old. High-grip asphalt areas offer differing levels of abrasion, designed to slow down errant vehicles and avoid impact with the barriers. Distinguished by their bright blue and red (for ultra-high grip) coloring, the Blue Line concept has since been adopted by a number of other circuits, though not as completely as at Le Castellet.

Also new was the adoption of Tec-Pro safety barriers; these offer a more scientific approach to collision control than the traditional tire barrier and, after proving themselves at Ricard, have seen widespread adoption elsewhere. These safety innovations were recognised in 2007 when the FIA Institute for Motorsport Safety bestowed the First Center of Excellence award on the new course.

Among the high-profile users of the Paul Ricard High Tech Test Track (as it had become known) was the Toyota Formula One team, which established a permanent test team in purpose built facilities, complete with its own entry onto the Mistral. The configurable nature of the circuit, plus the ability to conduct wet weather testing thanks to its innovative sprinkler system, proved a major draw as the team geared up to its Formula One debut.

In 2003, further modifications were made with the addition of a further chicane option on the Mistral, while the following year saw the installation of the Petit Beausset turn, which created yet further layout variations. More significant was the 2005 addition of new Verrerie 'S' bend options; while the original curve remained, two increasingly tighter options were added and these quickly became the more favored routes, particular for high performance vehicles.

In 2006 the track received FIA homologation for racing once again and by 2009 circuit bosses had decided on a change of policy and began the process of re-introducing racing. Renamed once more as Circuit Paul Ricard, a program of spectator events was planned, including a visit by the FIA GT and GT3 series. In preparation, a new 4,400-seat grandstand was opened on the start straight, supplementing the 600 seats in the Grand Prix Hall. Later that summer the circuit started the development of an additional public area: the hill over the 'Double Droite du Beausset' turn. This expansion increased the circuit capacity to over 10,000 people.

An extended pit building – providing an additional five garage spaces – and enhanced paddock area spelled the end of the short 'club' variation in 2010. Nevertheless, there are still a staggering 169 possible circuit variations (all of which can be viewed via the link on the right of the page), though inevitably only a few are used for racing.

Today, the circuit hosts a varied calendar of racing. Recent additions have been the WTCC touring cars, World Series by Renault and the ELMS, while the Blancpain Endurance Series hosts the new circuit's first night race in 2014.  From 2015 the famous Bol D'Or motorcycle endurance race also returned to its spiritual home.

Finally, in 2018, the circuit was announced as the host of the resurrected French Grand Prix, meaning F1 was back after a near 30 year absence.  In preparation, the circuit underwent a major two-month refurbishment and track safety update over winter 2017. 10,000 tons of asphalt were used to resurface the track and pit lane, and four corners were modified. The track has been widened at the entry of La Verrerie, the Virage du Camp at the western end of the circuit and the Virage du Pont leading onto the start-finish straight, while a new re-shaped and shortened version of the Virage de Bendor was added for motorcycle use.

Formula One and some categories such as GT Open use Circuit 1C with the V2 Verrerie 'S' , while Blancpain GT continues to use Circuit 1A without any chicanes for the Paul Ricard 1000kms.  The Bol d'Or, meanwhile, uses the new bike variant of Circuit 1A-V2.
​
Following complaints about the pit lane entry during the 2018 French F1 Grand Prix, a new entrance was constructed that winter, meaning from 2019 the pits were now entered at the exit of the Virage de la Tour.  The original entry has now been blocked off from the start/finish straight, while the pit exit lane has also been extended further down towards the entrance to the Pinède corners.