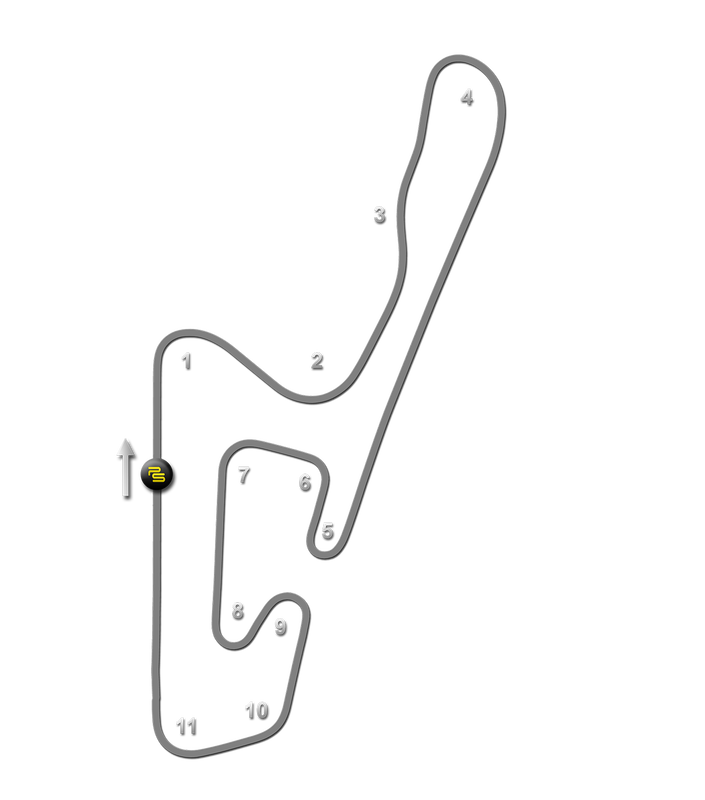 Circuit History
​Okayama International Circuit began life under a different name as an interesting experiment in racing circuit management. In the late 1980s, golf course magnate Hajime Tanaka wondered if the country club model which was the backbone of the golfing industry could be applied to motorsport venues.  By offering a 'playground' for the wealthy to enjoy their high performance cars, could he create a successful business?

In 1989, he put his plan into actions, selling a number of his courses (his company at that stage owned more than 50) to raise the initial finance to buy land and begin construction. The proposition to the rich of Japan was simple; stump up ¥15 million each (about $120,000 back then) for life membership of an exclusive club. This gave access to the track and its plush facilities for members to indulge their passion for speed, with garages on site to house a expensive collection of exotic cars, including a 1987 Tyrrell Formula One car. The luxurious trackside clubhouse and hotel were also at member’s disposal, along with a private club, The Bugatti Bar, in Tokyo.

Despite the high fees, Tanaka proved a persuasive salesman, concluding deals for around 350 memberships, in the main to private individuals, although some corporations also invested - notably Toyota and Nissan. The funding allowed him to buy land in a tranquil country setting in Okayama province and begin constructing the circuit in 1989. An estimated $100 million was spent carving the circuit out of mountainous terrain.

By November 1990 the circuit was open for business as TI Circuit Aida - the 'TI' referring to Tanaka International and Aida being the nearest town of significance. The new members found a compact course with a tight infield section and a long back hairpin. While hardly a classic layout, it did feature reasonable elevation changes and the sweeping S bends at the beginning of the lap proved a good challenge for the amateur drivers. While meeting all contemporary safety standards, the mountain terrain meant there was precious little room for maneuver and retaining walls remained close to the track itself, giving something of an 'old school' feel to the brand new facility.
A host of veteran British drivers were invited to take part in an initial race on the course for the benefit of the members, after whom the majority of corners are named. The fast sweepers became the Moss 'S' after Stirling Moss, while others honored were Jonathan Williams, David Hobbs, Dickie Attwood, David Piper, Brian Redman and Mike Knight, of Winfield Racing School fame.
In 1992 the first national championship races began with the arrival of the Japanese Touring Car Championship which held its series opener at Aida, victory falling to the Nissan Skyline of Hideo Fukuyama and Masahiro Hasemi. Tanaka had his sights set much higher, however, and began negotiations to host a second Japanese Formula One race.

With expansion to new venues in the Far East firmly on Bernie Ecclestone's agenda, the stars aligned in Tanaka's favor and in 1994 TI Aida was awarded the second round of the F1 season. Backing from Okayama Prefecture, which hoped to use the race to attract new tourists, made the event possible, though the logistics were fearsome. With a 12 mile trek down narrow country lanes the only way to access the circuit, it became the first all public transport grand prix, with fleets of coaches laid on to bus in spectators. Queue's still abounded and the lack of hotels (or indeed habitation of any size – Aida itself has a population of less than 4,000 and the nearest big cities are at least 100 miles away) also proved a problem for the teams, whose personnel often faced journeys of over an hour to get the track.

The race itself proved a walkover for the Benetton of Michael Schumacher when Ayrton Senna's pole-sitting Williams was tipped into a spin at the first corner by Mika Hakkinen's McLaren. Little did anyone know of the horrors awaiting at the next round at Imola, so it was a very different Formula One which reconvened the following year, albeit in October after the April date was postponed because of the severe earthquake which had hit Kobe. Although the track was not badly damaged, it was felt inappropriate to host the event while emergency services were still dealing with the earthquake's aftermath. The result was still the same – another easy victory for Michael Schumacher.

It proved to be the last F1 race, as Tanaka and the Prefecture decided the experiment should not be repeated. The ITC touring car series was lined up as an alternative for 1996, but in the end elected to race at Suzuka instead in what proved to be the series swansong. In 1998, the Japanese GT Championship (now Super GT) held a non-championship 'All Star' race as a seasonal finale, paving the way for the track to become a point-paying fixture every year since.

Minor changes were made to the course over the years, including a slight re-profiling of some of the turns and the abandoning of the original 'Attwood' short course, which was seldom used. The pit lane entrance was also moved after it initial position – at the exit of a fast corner – proved troublesome, with several tail end crashes. But, other than a resurfacing in 2004, the track remains largely as originally planned.

By 2003, Tanaka's tenure was coming to an end as circuit finances took a tumble. In March, Tanaka International applied for Civil Rehabilitation – Japan's equivalent of administration – and the circuit was bought in April 2004 by the Unimat Corporation, a Japanese conglomerate which, among other things, was a coffee machine manufacturer and sometime Arrows F1 sponsor. In May 2005, the circuit was renamed the Okayama International Circuit, losing its association with its former owner in the process.

Under Unimat, Okayama did attract an international series once again when the World Touring Car Championship arrived in 2008, for the first of three visits. The local road network had been much improved since the F1 days, though there was no getting away from the fact that the track was still very remotely located. Nevertheless, the races proved a modest success but WTCC moved on, to Suzuka's short course, for the 2011 season.
​
In 2012, the circuit subsidiary was sold by Unimat to the Aska Corporation, which is a maker of auto parts and perhaps therefore a more natural owner for a racing circuit! Under Aska, the circuit looks set to concentrate of the national racing scene, with races for the Super Taikyu Series, Super GT and Formula Nippon as well as the All Japan Road Racing Championship for motorcycles.