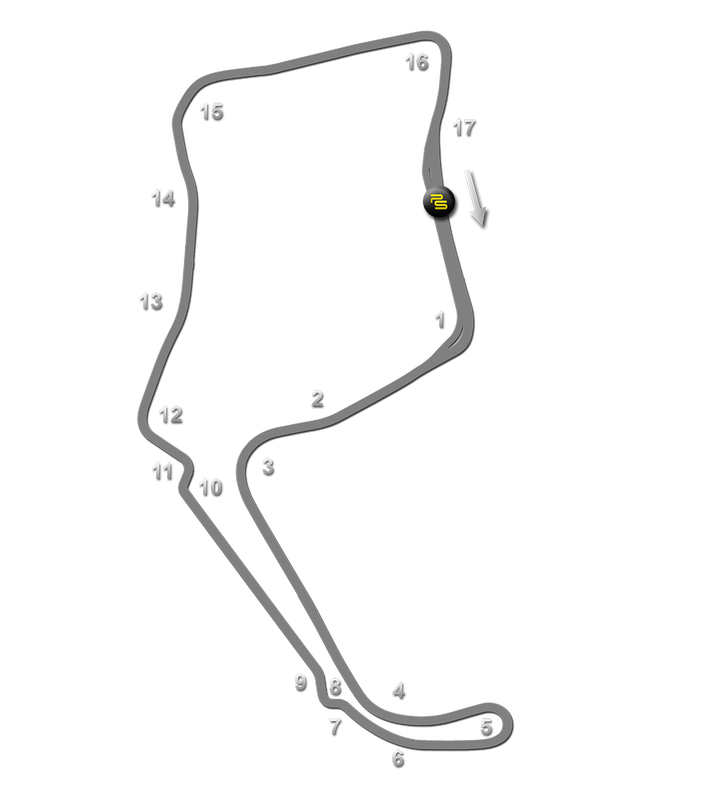 Circuit History
Set in a former country estate, Oulton Park's sweeping contours and picturesque setting have ensured it is one of England's most popular race tracks, almost from its very first laps in the 1950s.
Located near the village of Little Budworth, just outside Tarporley in Cheshire, Oulton Park can trace its history back to the manor house which once stood in the grounds. Oulton Hall was the ancestral home of the Egerton family, local landowners for nearly 500 years who were made Lords of the Manor by Henry VII. When the original hall was destroyed by fire in 1715, a grand new replacement was constructed, with formal parkland laid around it shortly afterwards.
Over the years, building work and improvements were made and the house contained a fine art collection. Then, on Valentine's Day 1926, a terrible fire broke out which completely destroyed the house. Six people died when the roof collapsed and the building burned for several days. So severe was the blaze, that it became the first fire in England to require the services of more than one brigade to extinguish it.
The building sat in ruins in the years after the fire and when World War II broke out, the land was taken over by the military. General Patton set up camp here in the run up to the Normandy Landings and Heavyweight Champion of the World Joe Louis, (who was by then a private in the US Army) gave demonstration bouts in the valley at Deer Leap to boost the soldiers' morale.

What remained of the old Hall was bombed out of existence by the Germans and, at war's end, the land was returned to the Egerton family. By then it was covered with rubble, huts and a twelve-foot roadway – the last of which would provide the catalyst for the racing circuit.
In the immediate post-war years, motor racing was seeking to re-establish itself. In many parts of the country, surplus RAF airfields were being converted for racing, Silverstone, Goodwood, Snetterton and Thruxton among the more notable. However, the Mid-Cheshire Motor Club realized that they had a much more interesting potential plot right on their doorstep and began attempting to persuade Sir Philip Grey Egerton to lease his land.

The process was complicated by the presence of Polish refugees still living in the army camp, but once the last of these left in 1951, Sir Philip gave his consent. It took several years to bring the site to the proper standards required for racing, but gradually a course using some of the army roadways began to emerge. Roughly square in shape, it plunged downhill towards a sweeping right hander next to a brook and artificial lake, before climbing back up the hillside, past the ornate gates and lodge which once led to the Hall and back to the start/finish.
The first race was organized for Formula 3 cars and motorcycles in August 1953, although bikes predominated the numbers. For the second meeting, held in October, an eager crowd of 30,000 was on hand to watch and it was clear the circuit had great potential. Immediately plans began to be made to extend the circuit to increase the viewing areas for spectators and provide a longer lap.
The familiar outline of the circuit began to take shape, with an extension turning sharp left at Cascades down to the Island Hairpin ready by May 1954 and a further extension to a bigger banked hairpin completed later that year. A new corner, called Knickerbook, rejoined the original circuit on the run up to Clay Hill, bypassing Range Corner altogether. The original short course was discontinued at this time, leaving 1953 as its only year of activity, though the outline of Range Corner can still be seen to this day.

International racing came to Oulton in August 1954, with the establishment of what was to become a summer Bank Holiday mainstay – the Gold Cup. Run for all of the major categories, from Formula One to Formula Two, F5000 and sportscars, it attracted drivers of the likes of Moss, Behra, Clark, Surtees and Brabham among many others. It also was the venue for a slice of F1 history in 1961, when Moss took the unique four-wheel drive Ferguson to victory, the only time a total-traction car has triumphed in the top category (four-wheel drive being later banned).

Minor changes occurred around the circuit, including the resurfacing of the Island Bend in 1957 and the building of two-story pit facilities, separated from the track by a permanent wall, in 1961.

The circuit was bought by Grovewood Securities in 1964, joining its portfolio of tracks which included Brands Hatch and Snetterton. Grovewood formed Motor Circuit Developments Ltd and installed John Webb to run the circuits. The die had been cast, and the facility was set to concentrate its activities as a motor racing circuit first and foremast, rather than as parkland.

What's in a name?
Oulton Park's corner names reveal the history of same of the faces and places that have been involved with its long history.
Nevertheless, safety was still a concern, particularly at a track lined by trees at multiple points. Tragedy would strike in 1969 when Paul Hawkins crashed at Island Bend during the Tourist Trophy, his Lola T70 hitting a tree and killing the Australian instantly.

Acknowledging the need to improve safety, a new chicane was introduced following the hairpin at Shell Oils Corner. Then, in 1975, more drastic action was taken with the creation of a new short circuit, which diverted off after Cascades to a tight right hander leading to Knickerbrook. Named the Fosters Circuit after long time circuit manager Ray Foster, it would become the main circuit used by cars for nearly 20 years.

Abandoned by the four wheel brigade save for the occasional club meeting, the International loop continued on in use for bike racing. During the 1970s international competition returned, with the arrival of the popular Transatlantic Series, which pitted the best of British and American bike racers against each other in televised match races. Thus the crowds got to see Barry Sheene, Kenny Roberts and Mick Grant do battle in the highly popular series.

Into the 1980s Oulton Park was, in truth, a little careworn in places and in October 1985, rumors started to circulate regarding the future of Motor Circuit Developments; at the time the property of Eagle Star Holdings which had been sold to British American Tobacco. This caused some alarm as to the future of the circuits. John Webb managed to convince computing magnate and racing enthusiast John Foulston (who had won the Gold Cup for three years in a row when run to Thundersports rules in the mid-80s) to make a bid, and Oulton, Brands and Snetterton were under his ownership by the following year.

Forming Brands Hatch Lesiure Group, Foulston set about revitalizing the circuit, carrying out necessary safety upgrades, particularly to the International extension. Cadwell Park was also purchased and added to the group's portfolio. Tragically, Foulston never got to see his plans fully realized, being killed testing an old Indycar at Silverstone in 1987. John Webb would run the circuits until 1990 before Foulston's daughter Nicola took charge.

By the 1990s, the headline series were the British Touring Car and British Superbikes, though the fast F3000 single-seaters also visited to contest the Gold Cup. Tragedy struck during the 1991 race, when Paul Warwick – younger brother of F1 driver Derek – crashed at Knickerbrook due to suspension failure. His car disintegrated when he ploughed head-on at 140mph into the barriers and he was killed instantly. The race was abandoned and Paul awarded the victory posthumously. The incident prompted changes and the insertion of a new chicane before Knickerbrook in time for the 1992 season.

A change of ownership occurred in 1999, when Brands Hatch Leisure was sold to the Octagon sports marketing agency for £120 million, a sale boosted by news that Brands Hatch had been awarded the British Grand Prix by Bernie Ecclestone from 2002. Major changes would be needed at the Kent venue and much energy and money was invested in the project, somewhat to the detriment of the other circuits in the group. Ultimately, Octagon was unable to secure the necessary planning permissions for Brands Hatch and was thus left having to lease Silverstone to hold the race.

Against this backdrop, it was perhaps slightly surprising that there was still investment at Oulton. Winter 2002 saw the 1960s pit facilities torn down and modern garages and a two-story control tower built in their place. The pit lane exit was also modified at this point, being extended to now enter onto the circuit after Old Hall corner. At the same time, modifications were made to the Knickerbrook chicane, which was enlarged and pulled further back from Knickerbrook corner itself.

In 2004, the MotorSport Vision consortium led by Jonathan Palmer bought Octagon's ownership of the four circuits. An immediate program of improvements was begun at the venues, with the aim of tidying competitor and spectator facilities, reversing the decline seen in previous years. Under MSV, Oulton Park has never looked better and people have voted with their feet. The British Touring Car round is now among the best attended, while the Gold Cup has been restored to prominence as a meeting for historics, becoming regarded as the 'Goodwood Revival of the North'.