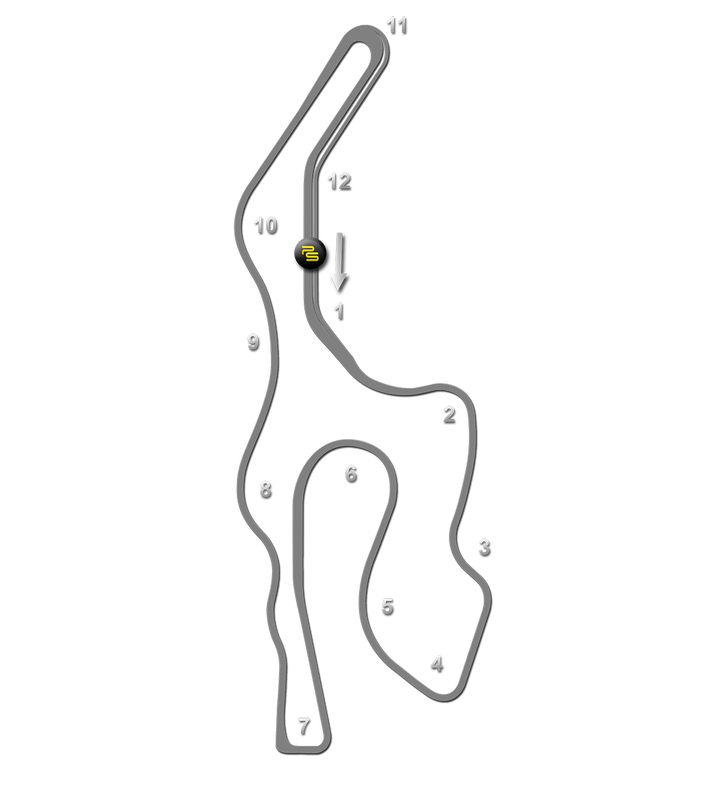 Circuit History
Sonoma Raceway has been transformed since the late 1980s from a sleepy road course with basic facilities into one of the busiest motorsport facilities in the USA, if not the world.

The classic road course, set in northern California's wine country, started life in 1968 as Sears Point Raceway. The 2.52-mile road racing course was constructed on 720 acres by Marin County attorney Robert Marshall Jr. and land developer Jim Coleman. Conceived during a hunting trip, ground breaking for the circuit began in August 1968, with paving completed by November the same year. The SCCA held the first event on December 1, 1968 and the early years at the facility saw Trans Am draw large crowds alongside a one-off USAC Indycar race in 1970.

After being sold to the Filmways Corp., a Los Angeles-based entertainment company for $4.5 million in 1969, the track began a turbulent period. Sears Point actually closed in May 1970 after recording losses and did not reopen until 1973, when it was leased to Hugh Harn and Parker Archer for $1 million.
Soon after, the Bob Bondurant Performance Driving School relocated to Sears Point from the Ontario Speedway in southern California. By 1974, Bondurant and partner Bill Benk had taken over management of the leased facility.

By 1977, a consortium which included Bondurant had bought the track for $1.5 million off the Filmways Corp., with Chris Pook and the Long Beach Grand Prix Association also coming on board in 1980. By this stage, events being staged included a round of the AMA Superbike series, which debuted in 1977 with a victory for the Ducati of Paul Ritter.

The track was renamed Golden State Raceway in 1981, but the Black Mountain consortium found itself in trouble when Filmways seized back ownership after payments were defaulted. Bondurant has already resigned as president in a dispute with Pook over the Long Beach Grand Prix's management plan.

Filmways sold the track for a second time to operations chief Jack Williams, Rick Betts and John Andersen at auction for $800,000. Fortunately some stability returned to Sears Point (as it was once again called), with sponsorship from Ford coming in 1983 and extra partners coming aboard in the shape of Dr. Frank N. Scott Jr. and Harvey "Skip" Berg.

The track was given its first complete repaving in 1985 and pit buildings appeared for the first time. 1987 saw NHRA drag racing arrive at the circuit's strip, providing a big boost to the calendar of events. When Riverside Raceway closed in 1988, Sears Point gained another headline event with the annual visit of the NASCAR stars. Ricky Rudd won the inaugural race in 1989. The same year the Skip Barber Racing School replaced the Bondurant Driving School - though this in turn was replaced by the Jim Russell School in 1996.

A $1million 'beautification' project in 1994 saw the addition of construction of a 62-foot-high, four-sided electronic lap leader board in the center of the road course. Another innovation that year was the creation of makeshift auxiliary pit road inside the hairpin (turn 11) for use during NASCAR events. Nicknamed 'Gilligan's Island', it catered for the additional nine cars that could not be accommodated in the main pit lane's 34 pit stalls. Since the length of the auxiliary pit road was significantly shorter, the cars that pitted there were held an additional 15–20 seconds at each stop to make up for the time that would have been spent if they had travelled the entire main pit road.
'Gilligan's Island' was never popular with drivers or crews, particularly as it was landlocked by the race course, and crew members were unable to leave once the race began. Teams sent only their primary pit crew to Gilligan's Island, and once they were there, they could not access the garage area or their transporters to collect spare parts/tools. In 1995 saw a further $3 million upgrade included the installation of VIP suites and a two-story driver's lounge/emergency medical facility.


The track was sold off by Berg to Speedway Motorsports, Inc in November 1996, which began a multi-year program which has transformed the fortunes of the circuit and seen considerable investment in infrastructure. Major renovations begin in 1998 with the creation of "The Chute," an 890-foot high-speed stretch between Turns 4 and 7, used for all NASCAR-sanctioned events. Trans-Am and Sportscar races also returned to Sears Point, with AMA Superbikes following in 1999.

A $70 million modernization plan - with the aim of creating one of the USA's premier motor racing facilities - began in 2001, with a modified Chute section, revised motorcycle course, better fan facilities and a kart track all included. A much-needed change came in 2002, when an extended pit lane was created (ending the use of 'Gilligan's Island' once and for all) and the start/finish straight was realigned to separate it from the drag strip.

Infineon Technologies concluded a 10-year naming deal with the circuit in June 2002, whereupon it became the Infineon Raceway. At the conclusion of the deal, the new name of Sonoma Raceway was chosen, rather than a reversion to its former Sears Point title.
A new chicane section was added in 2003 to bypass the fast Esses on the return leg of the Full Course, used for motorcycle racing and the majority of car racing (NASCAR continues to utilize the original 8-9-10 corner combination). A new hairpin - Turn 11A - was also inserted just past the drag strip control tower to bypass the original Turn 11, which had insufficient run off for single seaters and motorcycle racers.
The latest track revisions have seen the creation in 2012 of a Turn 11B hairpin - moving further past the drag strip tower - in the hope of making a new passing area for the Indycars. The turn 9A chicane was also widened by 10 feet, while the Indycars also began using a new variant of the Turn 7 hairpin, which included a straight run along the drag strip.