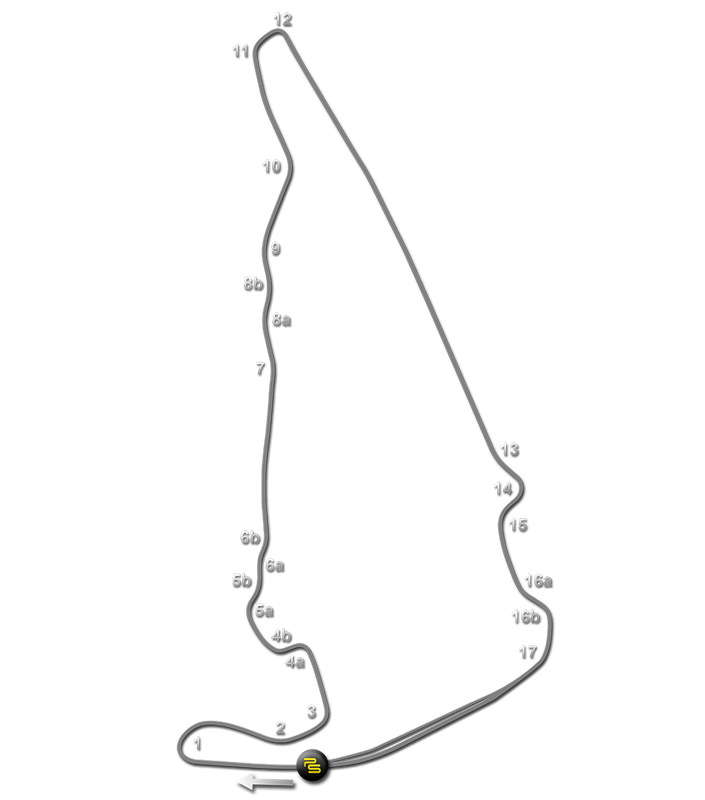 Circuit History
Virginia International Raceway has a history in two halves, spanning almost 60 years. From its origins as a sports car course in the 1950s to its resurrection as a 'country club' style multi-purpose venue, VIR, as it is commonly known, has long been considered one of the toughest courses to master in North America.

Its storied-history began in 1955, when a group of North Carolina racing enthusiasts began looking for a suitable venue for a road racing course. They soon found the perfect site on the state line on land owned by the Foote Family, in the community of Alton, near to Danville, Virginia. Forming a group called Sports Car Enterprises, they leased the land and set about creating a course.

By 1957, VIR was ready for action. At 3.27-miles, it was one of the longest permanent facilities of its time and presented a considerable challenge to drivers. Hugging the contours of the land, it featured some high speed sections, including two long straights, as well as sweeping corners over blind crests and a signature hairpin bend around an oak tree.

The first official event was an SCCA race that attracted stars like Carroll Shelby, Carl Haas, Bob Holbert, Augie Pabst, Walt Hansgen and Bruce Jennings. Shelby won in a Maserati 450S, going on to utter a quote, which summed up VIR perfectly: "One lap at VIR is like a hundred at Watkins Glen."

VIR soon became a firmly established part of the SCCA calendar but it's location in the heart of stock car racing country meant it was hard to attract sizeable crowds. Unable to make ends meet, Sports Car Enterprises handed back its lease in 1959.

Danville's Colonel Paul Rembold took over the lease and, together with track manager Henry Wallace, was more successful in enticing the crowds to watch a varied programme of sports car, motorcycle and kart races. These included rounds of the popular Trans-Am series and the first ever IMSA GT event in 1971, won by Peter Gregg and Hurley Haywood in a Porsche 914-6 GT. The pair won the return engagement in 1972, this time in a Porsche 911S.

The fortunes of the circuit soon dipped once more, however, with the fuel crisis of 1973 adding considerably to the financial difficulties. The track was closed following an SCCA endurance race October 13, 1974, after which it fell silent, turned over to agriculture once more.
For quarter of a century, the crumbling tarmac remained in place, providing a ghostly reminder of the track's past glories. Then, in 1998 investors Connie Nyholm and Harvey Siegel decided to leave their careers in New York real estate and resurrect VIR. Their vision was to form a 'country club' where the members would enjoy track time on member set days, tickets to all spectator events, and other benefits.


In 2003, a third new circuit variant was added, known as the "Patriot Course".  This stretched for 1.1-miles entirely inside the full course, allowing the two to operate independently and simultaneously. Link roads allow parts of this internal course to be combined with the full course to create 'Grand' east and west variants, although these are relatively infrequently used for competition.  An expanded pit lane was added to the Patriot Course in 2008.

In early 2013, Siegel retired from ownership and Nyholm became one of the only female majority owners of a racetrack in the USA. She has continued to develop the facility and its motorsport resort business model, which has been much copied by other circuits around the world.
Prior to the start of the 2014 season, the track's Full Course was repaved for the first time since 1999, widening the track by six feet at several locations to allow easier passing, moving the start and finish line to just after pit row for better viewing for spectators.  The North Paddock was also repaved to ensure an even and smooth surface for fans and drivers alike.

In its modern incarnation, VIR continues to host top-level sports car racing with a round of the TUDOR United SportsCar Championship. Other events include the NASCAR K&N Pro Series and continued amateur and historic meetings. The track also features full resort facilities, including three hotels, several restaurants and activities such as karting and skeet shooting.