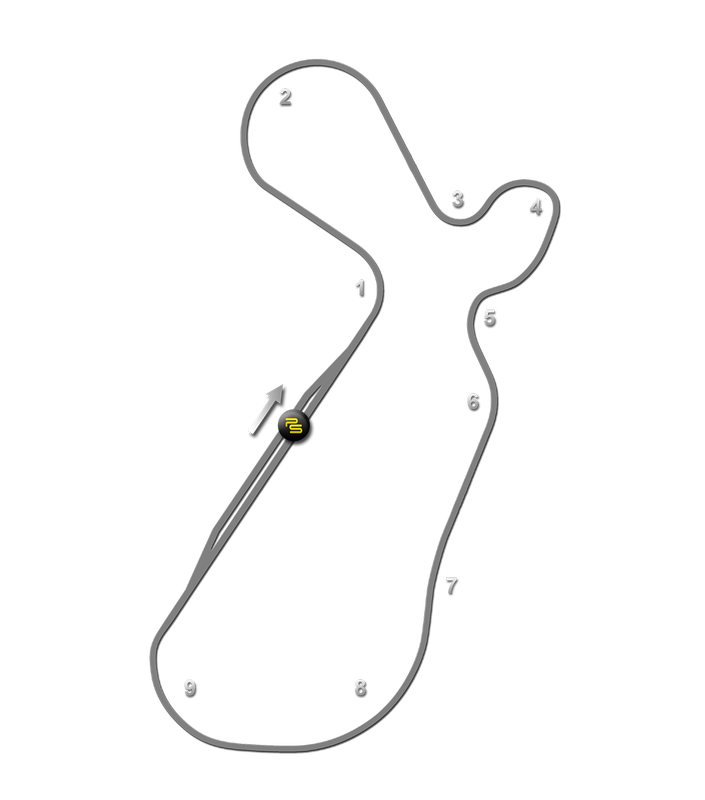 Circuit History
Willow Springs is one of those rarest of entities – a track with a more than 60-year history which has retained its original layout with no alterations whatsoever. Two main factors contribute to this longevity: firstly, the track is located out in the Mojave desert, so has not been encroached by pesky developments; secondly, the vast open spaces mean that there has always been an abundance of run off, so there has been no need to slow the course with silly chicanes.

That's not to suggest that there has been no development of the facility, however. In fact, there has been tremendous change since the 1980s and the 600-acre complex now houses two additional road courses as well as dirt and paved ovals to cater for every conceivable motor sports discipline.

The original track at the facility – since the advent of the other courses known as 'Big Willow' – is steeped in historical significance. The original intention was to create a copy of the Indianapolis Motor Speedway oval, but space constraints resulted in the more complicated road-course configuration. Ken Miles was among several racers who helped shaped the layout. Construction began in 1952, with the inaugural event held on November 23, 1953. Originally the circuit featured an oiled dirt surface, but by 1954 this had been paved over to create the permanent surface we know today.

From the outset, this was a brutally fast course – with one of the highest average speeds of any course in the United States, earning it the moniker "The Fastest Road in the West." Corner speeds range from 70mph to 170mph and the fastest cars and bikes can reach 200mph on the straights. Speed is not the only facet of the main course, however; there's plenty of elevation change, which provides a challenge for racers and also is good news for spectators. While there are no grandstands, there are plenty of banks to watch the racing from and from most views, you can almost the whole of the course.

Sportscars and motorcycles have been the mainstay of racing at Willow Springs over the years, with the California Sports Car Club organizing its first open road races at the venue in 1954 and events continuing (eventually under SCCA auspices) into the 1980s. The circuit can also claim a slice of history for two-wheeled racing, as the host of the first US Motorcycle Grand Prix in 1960, albeit organized by the California-based American Federation of Motorcyclists (AFM) and not part of the World Championship calendar.

The circuit passed into the ownership of Bill Huth in 1962, starting a long period of family ownership which continues to the present day. Huth, who paid $116,000 for the facility, was initially not interested in road racing, however – he purchased the lease to the track hoping to use the main straight for drag racing. When this turned out not to be long enough for a AA/Fuel dragster, he turned his attentions elsewhere. Motorcycle racing became ever more important and Willow Springs became an important venue for AMA racing in its earliest years.

Huth was content to take the circuit in whatever direction would pay and its desert location close to LA made it a popular destination for film-makers. In 1966 a USC student captured a qualifying attempt by racer and Cobra Daytona designer Pete Brock in a Lotus sportscar in the short film '1:42:08'. The film-maker's name? George Lucas... Disney came calling two years later when Herbie the famous VW Beetle paid a visit during 'The Love Bug'. In the film's plot, Willow Springs was transformed into "Jackrabbit Springs" – Riverside and Laguna Seca also feature in the film, albeit as themselves!

Into the 1980s, the track was used by a number of Formula One teams for testing. Arrows, Williams and Renault would stop by to complete tune ups and test runs prior to the Long Beach Grand Prix. After lowering the outright lap record one year to 1m06.3s, Huth asked Nigel Mansell what it would take to break the minute mark. The answer? "A gorilla with bigger balls..."

Huth had purchased the lease outright in 1980 and soon began setting about expanding the facility as his careful stewardship continued to build greater operating revenues. The initial 230 acres was expanded to 600 with purchases of adjacent land. Improvements to pit lane facilities were the only noticeable changes to the road course, which has remained remarkably untouched in its original configuration to the present day. Instead, to expand capacity, a second road course was constructed alongside it, known as the 'Streets of Willow Springs'. Primarily intended for school use, minor club racing and testing, the 1.3 mile course also featured a skid pan.

Over the years several extensions pushed the lap length of the new course up to 1.5 and then 1.8 miles and the Streets (so-called as the course was apparently designed to aid those racers trying to set their cars up for the various California street circuits) went from strength-to-strength. A third road course – the Horse Thief Mile – was added in 2003 and features a canyon-like layout complete with significant elevation changes.

Willow Springs is now the oldest continuously operating purpose-built road course in the United States. Thanks to the persistence of racing fans, the former fact was recognized in 1996 by the State of California, which recognized it as an Official Point of Historical Interest.
Despite a number of lucrative offers, Huth never sold out. Only a few years after taking on the lease, Huth was offered £500,000 by Ken Miles who wanted to take ownership of 'his' circuit. Huth politely declined the offer saying he "hadn't had it long enough yet". Fast forward a few more years and another offer came in from Japanese investors – this time for $30 million. Then another from a Chinese consortium for $13 million. Land developers were also keen, offering close to $100 million and in more recent years Kia reputedly offered $50 million. Each time Huth said no, reasoning: "What would I do with all that money anyway?"
​
Huth passed away aged 91 in May 2015 but the track remains in family ownership, with his two sons and two daughters continuing the family tradition "because it's what dad wanted us to do."