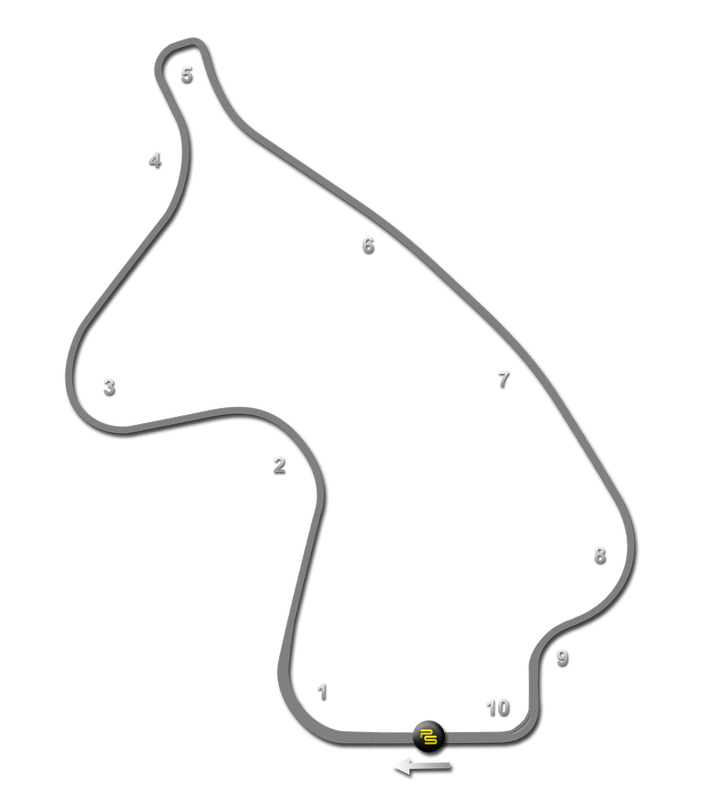 Circuit History
Mosport Park was Canada's first permanent motor racing facility and is one of a handful of circuits to have continued in operation for more than 50 years without any layout alterations.

Plans for a circuit were first mooted in 1958, when the British Empire Motor Club (BEMC) formed a development committee to investigate the possibility of selecting and buying a piece of property for a road racing course.  By the summer of that year, a 450-acre parcel of land had been located near to Bowmanville in Ontario, which at the time was occupied by a farm.

With a location uncovered, plans advanced and it soon became clear that a separate company would be needed to organise the complex task of building and operating a circuit. Mosport Limited - a contraction of Motorsport Limited - was duly formed and would go on to lend its name to the circuit.  By 1960 further progress had been made and a swooping track design making the most of the contours of the land was drawn up by one of the Mosport directors, Alan Bunting.  The proposals called for considerable groundworks to be carried out; in the one place the whole side of a hill had to be scraped away and leveled.

That same year while on a trip to Toronto, a visiting Stirling Moss was shown the circuit plans.  He immediately suggested changes to the carousel-like hairpin at Turn 5.  A 90-degree right followed by another right leading onto the back straight would, he felt, provide a greater challenge and duly the plans were modified.  The resulting Turns 5A and 5B are known as Moss Corner as a result.
Construction continued, though there were a number of setbacks.  Zoning logistics and delays caused by heavy rainfall meant that costs soared.  When it was finally completed in May 1961, it had cost double the original $250,000 estimate.  A clubman's race organized by the Oakville Trafalgar Light Car Club christened the new course but, appropriately, the first major race - the Player's 200 for sports cars which was held in late June - was won by Stirling Moss in his 2.5 litre Coventry Climax-powered Lotus 19.
Stock cars and Can-Am were among the early years highlights but by 1966 the costs of construction had caught up with Mosport Limited, which was put into liquidation.  It was purchased from the receiver by a company called Cantrack Motor Racing Ltd, whose accountant was Harvey M. Hudes, who became the driving force behind the track until his death in March of 1996.
Top level motorsport came to Mosport in 1967, when the circuit became host to the first Canadian F1 Grand Prix.  A crowd of 58,000 witnessed Jack Brabham triumph ahead of Denny Hulme.  Mosport would alternate hosting of the GP with Mont-Tremblant until the latter's financial troubles saw Mosport become sole host from 1971 onwards.  It would continue to host the race until 1977, after which F1 left permanently for Montreal.

Safety at the circuit came under question after a number of large accidents.  John Surtees had his biggest crash in 1965 when the suspension on his Can-Am car broke, leading to a violent accident which left him with multiple injuries.  Two years later Ian Ashley was also injured when he crashed in qualifying of the Grand Prix.  Then, in 1985, Manfred Winkelhock was killed when his Porsche 962 crashed at the sweeping downhill Turn 2 and gradually international motorsport drifted away.

After the death of President and General Manager Harvey M. Hudes in 1996, his longtime business partner, Bernard J. Kamin became President and CEO.  By the following year the circuit had changed hands - firstly the lease was sold to International Motorsports Group (IMSG) who in turn divested it 1998 to Don Panoz (founder of the American Le Mans Series and owner of Road Atlanta and Sebring).  By October of 1998, Panoz Motorsports had bought the facility outright.

Under the new ownership, a series of circuit improvements began.  In 1999 the pit lane was extended and a new pit exit was created and in the autumn of the same year the run-off areas in Turns 2 and 4/5 were enlarged.  The entire track was widened to 40ft in 2000 and completely repaved.

Developments continued in 2004 with the opening of a new kart facility, complementing a half-mile oval course which had first opened in 1989.  In 2006 50,000 sq ft of lower paddock was paved and Mosport began a two-year program to install new debris fencing around the circuit.
​
In June 2011 a new company established by famed Canadian racer Ron Fellows, transportation industry leader, Alan Boughton, and real-estate developer Carlo Fidani took over ownership of the circuit.  A programme of extensive renovations and facility improvements was begun, which saw an expanded pitlane, resurfacing at key points around the lap and new pedestrian bridges installed at Turns 2 and 7.  Meanwhile a new sponsorship deal saw the circuit officially renamed as Canadian Tire Motorsport Park.
THE PHYSICS OF  Road • Oval •  Kart • Autocross • Sim •  Off-road   RACING