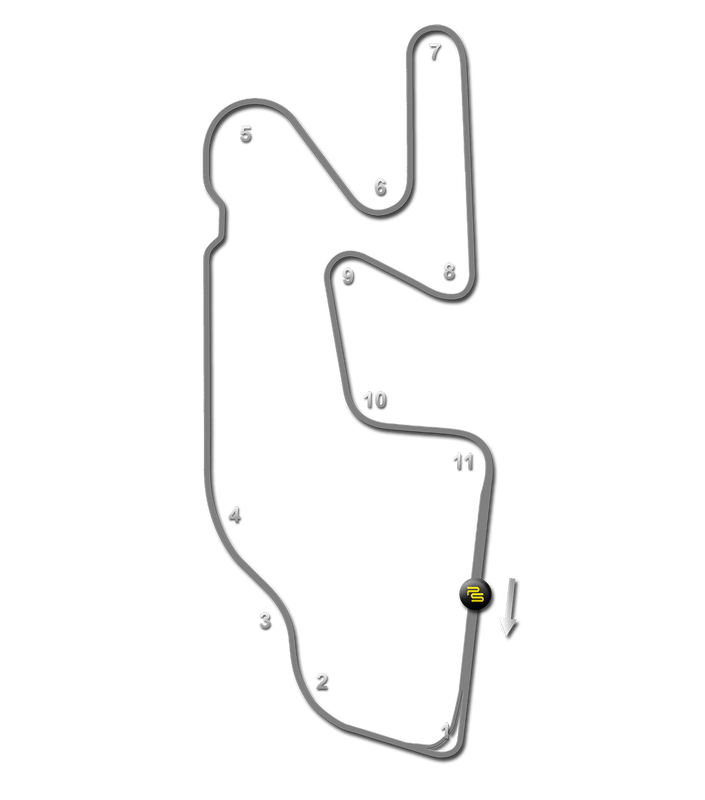 Circuit History
Watkins Glen is the spiritual home of road racing in the USA, with crowds flocking to see top-level racing since the 1940s.

The driving force behind racing in upper New York State was Cameron Argetsinger. The young law student from Ohio was a frequent visitor to the Finger Lakes region where his father had a holiday home on the shores of Lake Seneca. He dreamed of bringing European style competition to Watkins Glen and, as an early member of the SCCA, he set about making his dreams a reality.
He proposed the "Watkins Glen Grand Prix" to the local Chamber of Commerce, who gave their enthusiastic backing. The dream became a reality in October 1948, when the first race took place on a challenging 6.6 mile course that encompassed asphalt, cement and dirt roads in and around the village. Permission had to be sought to close a section of railroad for the duration of the races, as the course passed directly over it.

The first winner was Frank Griswold, of Wayne, Pennsylvania, who triumphed in a pre-war Alfa Romeo 8C2900 coupe, closely followed by Briggs Cunningham in his infamous Bu-Merc. Other prominent entrants included William Milliken, the noted aircraft and vehicle dynamics expert (who rolled his Bugatti 35 on the last lap of the qualifier, giving "Milliken's Bend" its name).
​
For five years, the top names in American sports car racing visited the small village and huge crowds came out to watch them race – a fact that was to soon have tragic consequences. In 1951 Sam Collier ran off the road and was killed when his Ferrari rolled into the fields alongside the course. Later in the day, another car left the road, injuring a fireman and two spectators. Worse was to come in 1952 when Fred Wacker's lost control on the start-finish straight in the town, entering the crowd, killing a child and injuring 12 other spectators. The meeting was abandoned and it was clear that drastic change was needed.

In reaction to the tragedies, New York State banned racing on state highways, so a new course was sourced a short distance away in the town of Dix. A 4.4 mile course was created using town and agricultural roads, with input from 1951 race winner George Weaver and Milliken. Spectator control, parking and concessions were all dramatically improved at the new site.

While the second course was undoubtedly safer from a spectator perspective, drivers soon complained of a lack of run-off and poor visibility. It quickly became clear that continuing to use farm roads for racing was unsustainable. What was needed was a permanent facility.

A parcel of land overlapping part of the second course was identified and construction began on a new 2.3 mile long course. Milliken was again consulted on the layout, which was completed with input from several engineering professors from Cornell University.

The new circuit opened in 1956 and soon began establishing itself as a major national and international venue. NASCAR paid its first visit in 1957 and in 1961 the Formula One stars made their first appearance, Innes Ireland taking his only victory for Lotus. The British winners continued, with Jim Clark, Graham Hill and Jackie Stewart all enjoying multiple victories in the intervening years until Jochen Rindt triumphed in 1969.

The 1970 season would be the last on the third configuration of the Glen. Concerns had already been raised about safety into The Loop, with a chicane used by some series for several years. Formula One was not one of these – no doubt to the chagrin of Graham Hill, who was severely injured in the 1970 race.

The circuit underwent a major overhaul for the 1971 season at a cost of $2.3 million. The "Big Bend" and the turns leading up to it were eliminated, and replaced with a new pit straight, while the Cornell computers again assisted with the design of a new extension, quickly nicknamed 'The Boot' due to its distinctive shape. The whole track was also resurfaced and widened.
The new extension was not ready in time for the Six Hours, which used the short course and the original pit lane, but by the time of the F1 Grand Prix, the full circuit was complete. Its distinctive powder-blue Armco barriers were an immediate visual clue to surroundings and the new course was well received by the drivers. François Cevert took his first win for Tyrell on the revised course.
It was not long before tragedy struck, however. In practice for the 1973 race, Cevert crashed in the uphill Esses and was killed instantly when his car struck the Armco barriers. The following year Helmuth Koinigg died when he too hit the barriers – in both cases, the barriers were uprooted on impact, contributing to the severity of the injuries suffered by both drivers.

In response, a temporary chicane was installed at the Esses in 1975, but with the rising speeds of F1 the writing was on the wall. In the end, it was money that spelled disaster; the costs of the 1971 redesign were still being paid off, and with the F1 sanction fees increasing, the Glen was in trouble. When the 1981 sanction fees could not be paid, the FIA removed the race from the calendar and the circuit organisation was doomed. The Glen found itself in administration shortly after.
For two years, the circuit was effectively closed, hosting only a handful of events without spectators for the SCCA. Then in 1983 Corning Enterprises, a subsidiary of nearby Corning glass company, partnered with International Speedway Corporation to purchase the track and rename it, Watkins Glen International.

Under Corning, the circuit was renovated and underwent a revival. The chicane at the Esses was removed completely in 1985 and the big sportscars returned in the form of the IMSA series. NASCAR too returned in 1986, though only to the short course.
The problems of increasing speeds and the close proximity of the Armco barriers reared its head again early in the next decade. In 1991, Tommy Kendall was badly injured when his IMSA prototype crashed at Turn 5 and, seven weeks later, NASCAR driver J. D. McDuffie died in an accident at the same spot. Track officials added a bus stop chicane to the back straight in spring 1992, known as the Inner Loop, establishing the current course layout.

Further infrastructure improvements continued, including facility upgrades ahead of the return of the Indycars in 2005, plus a new state-of-the-art Media Centre and the addition of two pit boxes in 2008, in time for the circuits 60th anniversary celebrations.
THE PHYSICS OF  Road • Oval •  Kart • Autocross • Sim •  Off-road   RACING